Return of the Pissoir?

Humans, all 7.8 billion of us as of 2020, comprise an outsized portion of the world's mammals. We and our livestock equal roughly twenty times the biomass of all remaining mammals, and are still increasing.

We have become the unlimited apex predator, and consume a huge portion of the annual world photosynthetic productivity. This trend can't continue, but for now, there it is.

Population overshoot and our impact on the world is the start for myriad topics of discussion, but this post is about pee.

Our population trend is only made possible through the energy utilization of fossil fuels. This energy base enables easy access to all the other many resources we consume. Industrial agriculture relies not just on fuel to run tractors and harvest equipment, it is used to create or mine the fertilizers that have enabled the green revolution.

So as we begin the downward glide of fossil energy use, what will agriculture look like? I think it inevitably will slowly return to the closed cycle nutrient scheme that was the way for millions of years.

Currently, agricultural soils are mostly worked to death, and are often treated as a physical matrix for root anchorage, with all plant nutrients supplied annually by the farmer, shipped in from thousands of miles away by truck and pipeline.

As this scheme unwinds, how will we maintain soil fertility as we continue to harvest crops, even if by muscle power?

Human urine is an excellent source of phosphorus and nitrogen. getting it back to the field and garden will need to be central practice of agriculture. Many have heard about the Chinese farmers of forty centuries and their night soil practice ( it wasn't THAT sustainable, there was still soil loss, but it was better than relying on chemicals that won't last forever)

But the general descriptions I've heard don't mention whether they used both the feces and the urine. Organic content is good for building soil, but our urine actually contains most of the nitrogen and phosphorus that we excrete. To separate and target the most impactful nutrients makes a lot of sense.

Which brings us to pissoirs.

I think we know that as humans built larger and larger cities, the issue of waste build up was poorly dealt with. Disease and a simply unpleasant environment was becoming too much.

One conjures up visions of drunk men staggering home from pubs, stopping to piss on the sidewalk as the urge overcame them. ( What were women to do? We'll leave that question and its various implications right there)

Leave it to the city of light to attempt a higher level of civilized behavior and deal with the problem.

Paris began installing pissoirs to solve the problem, but these all drained into the slowly developing sewer system. The concept spread to other European cities, and over time, large cities became a bit more pleasant to saunter in. Now we are all modern, and there are a range of public restroom designs out there. There are even unisex or separate female accommodations!

One of the original pissoirs in Paris 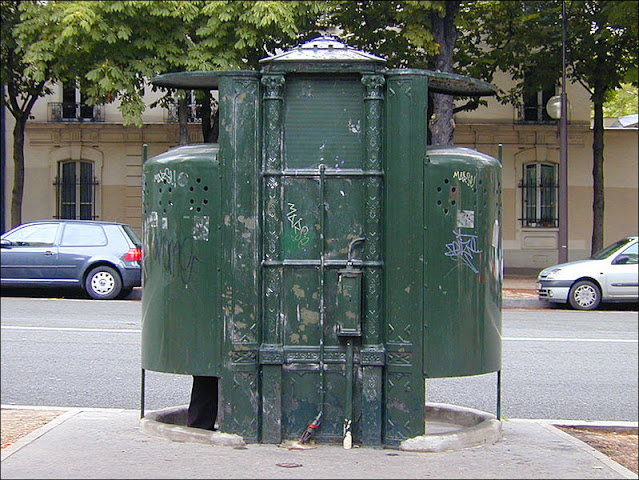 A modern version- but where does it go? 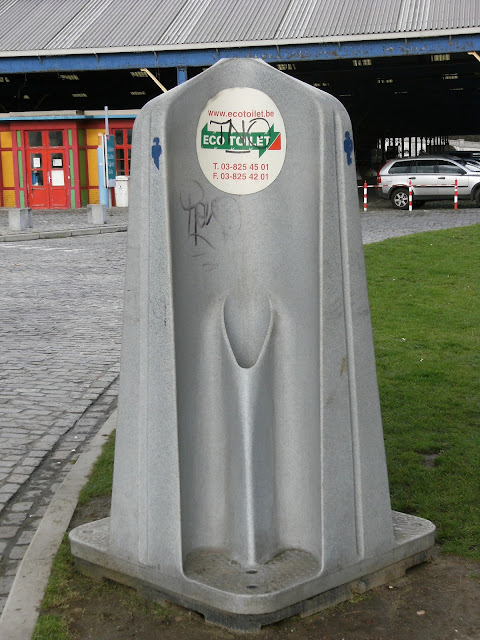 On our little homestead, I have two composting toilet setups, one at the house, and one in the barn. I don't do all my business in them, as the house plumbing is so convenient, but a good share. The one in the barn is a simple lovable loo bucket system as described in "The Humanure Handbook" by Joe Jenkins.
The one at the house has separation, provided by a special seat modification. 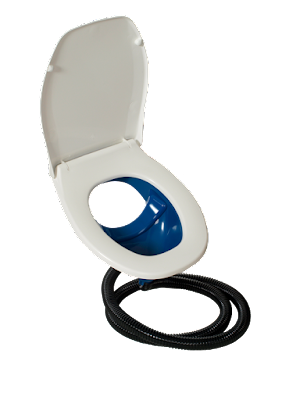 https://www.separett.com/en-gb/our-products/toilets/urine-diverting-composting-toilets/privy-501
I can say it is amazing how much pee one generates when you actually collect it and see the resulting volume. There are questions on how much to dilute before application, and how to minimize loss of nitrogen from ammonia volatilization, so I'm still looking for the best science based practices.
Anyway, for the vast majority of people, be they urban or suburban, this scheme might be hard or impossible to utilize. Mores the pity.
But I can imagine a future entrepreneur starting a business that collected from neighborhoods and delivers to local farmers to give needed nitrogen and phosphorus inputs, as what else can they do as commercial fertilizers become scarce or very expensive?
Or a new network of pissoirs in dense city centers where the pissoirs are NOT hooked to the city sewers, but to storage tanks that periodically ship off to the farms.
It's hight time to get over the ick factor and close the circle.
Posted by Steve Carrow at 9:29 AM