Involucres and obtaining a yield

I just finished harvesting the hazelnuts this fall, and so will share how that went.

The first planting was in 2012, but we weren't living here yet, and when the drought happened that year, we could not figure out irrigation. Nearly every single seedling died back to the root, but most came back next year. So they are tough, but had a big setback. They are native to the region, and normally rainfall is adequate, but a drought year is tough on brand new seedlings that had not had time to set roots well.

Care has been minimal. They have received no fertilizer or water, and were planted directly into untilled pasture.

I do mow next to each row to reduce the competition a bit from grass and other annuals the first couple years, but now that they are larger, I just mow to make access easy and stop woody plants from migrating over from the woods. The ash, prickly ash, box elder, wild grape, sumac, and briars have plenty of room to play elsewhere.

These plants were from Mark Shepard's nursery, so they are from his best plants, but were neither controlled cross nor propagated, so the genetics are only roughly predictable. The variation in plant shape and productivity is large. Many plants have no nuts at all yet, and some are prodigious. Overall, it's a chore to hand harvest

Without the initial setback, and more intensive management, they would be in full production by now, but are still ramping up. That's ok, I am intentionally trying to see how this food crop will do with as little fossil fuel input as possible. 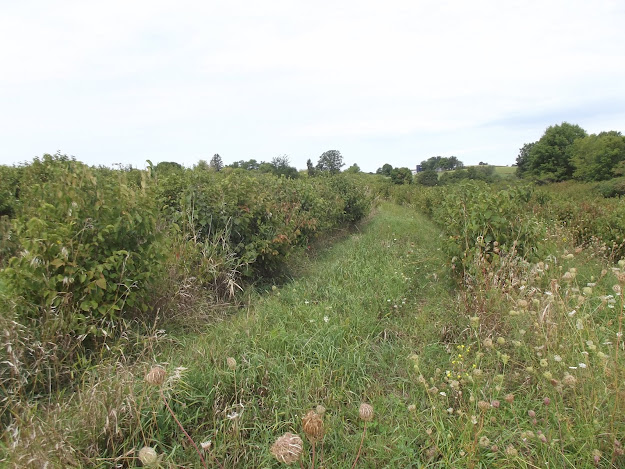 Here are two typical plant shapes with decent nut production. Note that there are a lot of nuts under leaves that you can't see.
Taller, more tree like, nuts scattered along the stems. 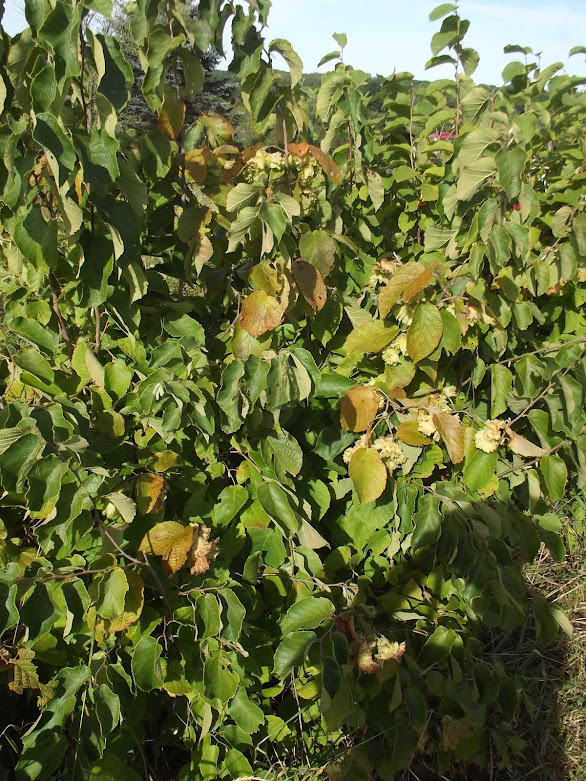 shorter, bush like, nuts mostly at the top. That's goldenrod in the row, blooming. The bushes will eventually shade them out more completely. 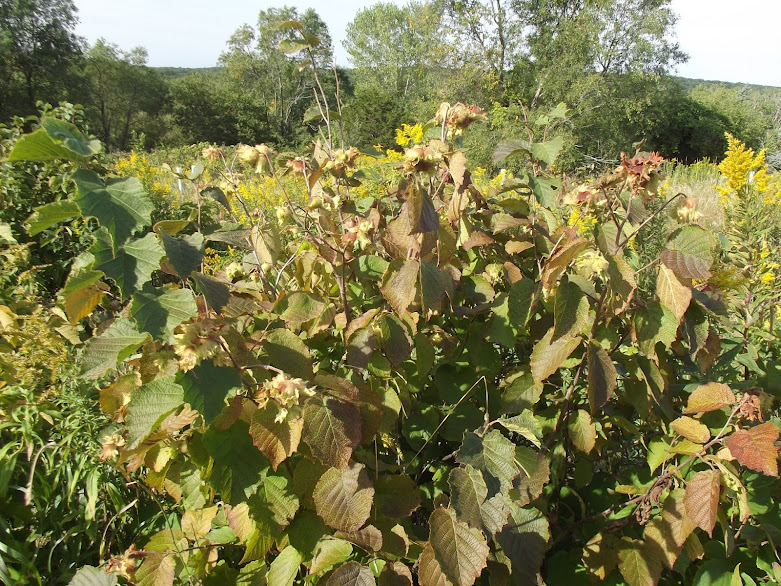 I used harvest bags similar to this: 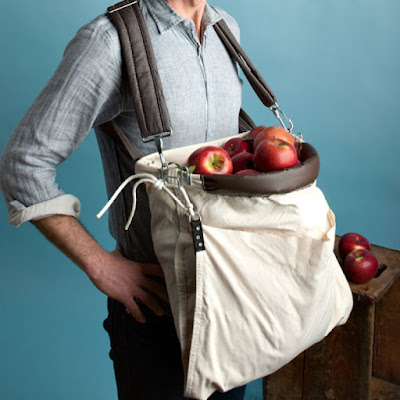 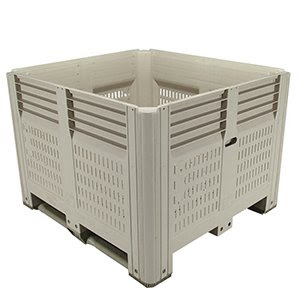 I kept back a few pails worth for hand processing and making home made hazelnut chocolate spread, but most went on to Mark, who has been developing farm scale mechanized processing equipment.

Which brings us to involucres. This particular nut is mostly enclosed by a fleshy covering that wraps around the nut, and slowly releases as the nut matures and starts drying. They are basically a type of husk. I guess it is some sort of evolutionary adaptation to give a bit more protection from insects to the nut?

Since I harvest when the involucres are still a bit green, the nuts don't pop right out easily. If I waited longer, many of the nuts would release and fall to the ground, greatly reducing harvest efficiency. So after the nuts dry a while in our sunroom, I remove husks by hand, which is time consuming. All the time I'm husking, I'm thinking there must be a way to mechanize at even smaller scale than currently being worked on. Like a household gadget similar to a grain mill. Maybe a good winter project for the workshop.

Permaculture design principle #3 is obtain a yield. That struck me as funny the first time I read it, seems obvious, but it does point out that as a food system, at the end of the day, calories out have to be more than calories in, or the arrangement won't continue. All the hand work I presently do is exploration, but at some point, I will need to tot up both sides of the ledger and see how well I can do as I scale up.

The hazelnut spread is quite good, and no palm oil!