OK, Here is my take on GMOs, so I'm getting into the opinion side of things, as opposed to farm updates. (The blog name "Virid views" can be taken two ways. It is both things I see along the journey, as well as my views on what I see.)

I oppose the use of genetically engineered organisms.

Before I list my concerns, this is where I am coming from. My opinion is partly science based, and partly value based. Regarding the science, I will give researchers the benefit of the doubt as I would with any other area of public concern, that they are conducting the best science they can, and that their initial assessments are the best information we have to go on.

That  said, I do have a concern with the science. While they have not found any health risks to date, it seems like everyone thinks that if it doesn't cause cancer or obvious first order observable effects, it is ok. This in spite of the fact that many other technologies and medical "advances" have ended up causing problems we were not able to anticipate or observe initially. Human hubris seems to be hard wired into the race, not to speak of the powerful drive for profits.

Ok, my concerns:
1. The science on GMOs is preponderately about human health, but not nearly enough about introduction of unique organisms into the biosphere that have not been the result of millions of years of interactive evolution with the rest of the biome. Hubris once again, but in this case, making the assumption that we understand enough about how the ecosystem works that we are comfortable tweaking a variable that could never have happened through normal evolutionary pressure. When we consider the two relatively new areas of research such as epigenetics and the human gut biome, we need to realize that there is a LOT we still don't know when considering the impact of new biotechnology.

2. Industrial agriculture is also centrally controlled agriculture. At one time, a small holding farmer was the epitome of autonomy and self reliance, but ask today's large commodity farmer about their livelihood, and many will say that they feel trapped and don't like how things are trending, but see no way out. They work their butts off like any permaculturist or organic farmer, but in many seasons are just a step ahead of the bank in paying off yearly production loans.  Seed saving is becoming illegal, options for seed become less every year, and profit making is a central motive for much of agriculture research. This is one more area of the economy that has been allowed to become an oligopoly.
https://msu.edu/~howardp/seedindustry.html

The endless treadmill- We already see reports of herbicide resistant weeds, pesticide resistant bugs, and ag tech companies coming up with "stacked" genes, enabling them to kill weeds by drenching them with TWO herbicides that the food crop has been modified to resist. Where does this end?

4. Competition through collaboration- Long term agriculture practice, to be truly sustainable, needs to work with nature, rather than against it. That does not mean that we return to hunter gatherers, or use no technology, but rather be smart about choosing methods, and have a bias towards initially observing rather than dominating. GMOs are an attempt to dominate and create monocultures suitable only for mans needs, not the overall ecosystem health. If nothing else, enlightened self interest would have us collaborate with, and share a bit bit more with our fellow organisms, rather than risk some tipping point we aren't yet aware of. It's time to move from r- selected behavior to K- selected behavior, and become the keystone species we were meant to be.

5. No turning back, or invoking the precautionary principle- GMOs are a unique technology in that once released in to the world, we can't stuff it back in Pandora's box. Natural powers of replication will take over, and a new stable state of the ecosystem might not be one we like. Just look at the disasters we have already caused by transporting organisms all over the globe (intentionally and unintentionally) into new biomes they were not a part of, and wreaking havoc. GE organisms would potentially result in even worse unbalancing events.

6. Resilience and brittle technology- The more we depend on fewer and fewer food crop genetics, the more at risk we are for a black swan event or single point failure that we have no back up plan for. There is a reason that nature expresses such a wild abundance of genetic variation- IT WORKS. It has stood the test of time, and overall biome health results because the whole is greater than the sum of the parts. GMOs help make the food foundations of our society more narrow and unstable.

Some personal history- I was raised on a farm.  Back in 1970, Southern Corn leaf blight decimated the U.S. corn crop.
https://en.wikipedia.org/wiki/Southern_corn_leaf_blight#Importance

We had our losses, but not as bad as some. What had happened, was a natural genetic variation that eliminated expensive hand detasseling seed corn fields had been incorporated into nearly all seed corn in the U.S. It turned out that this variation was also especially susceptible to the blight. One dampish year, and disaster struck. By my sophomore year in high school, us rural kids all had summer jobs detasseling again. Seed companies all doing the same thing to save money was brittle or "unresilient" technology in action.


Unfortunately, we have already opened the pandora's box, and we are unlikely to turn back, and in some cases, where GE organisms have already "escaped" or cross bred, we can't turn back.

In the mean time, some of us plant many varieties of heirloom veggies, slowly figure out how to get a good crop without chemicals, and try to regain resilience.

sunroom seed starting or why we bought this house

I mentioned in my 2016 garden update post that the sunroom seed starting last year didn't go that well, and I plan to change things a bit to improve that. Here is the sunroom I am using to start our garden seeds. Photo taken the other day on a sunny, late winter day, as sun angle is starting to increase. 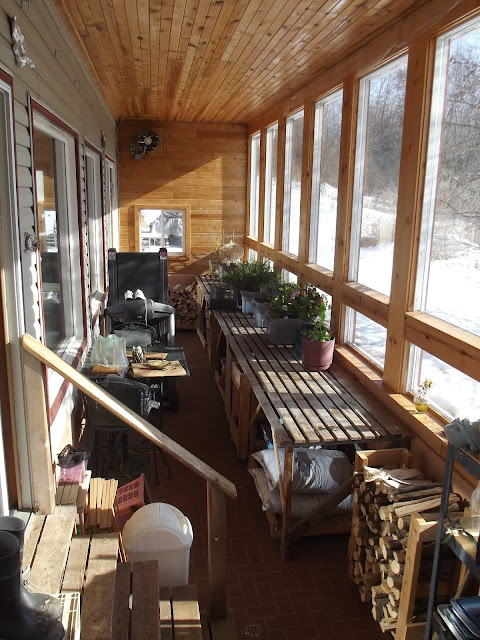 As you can see, I didn't tidy up for the photo, lots of things to notice. Firewood stacks, potting soil bags, self watering containers with herbs that stay green all winter, the big windows that admit sun into the living room, and even a treadmill so my wife can get the blood moving in the dead of winter. We have a big sliding door in to the room, and on sunny winter days, we have even left the door open to let warmer air in to the house.

A bit of history on the sun room. When we started looking for a small farm in this area, we soon found that real estate websites were a good way to get a feel for price ranges and features we might be able to afford (without spending hours traveling).

Originally, I had wanted to just buy open land, and build a house and everything else from scratch. Arranging everything on permaculture principles and our own ideas sounded great. The farm we saw on the internet and ended up buying had a house, but the house had enough positive feature that  I gave up on my dream of building my own house. Looking back, it was a very lucky turn of events, as house building while still working a full time job would have been a nightmare.

The sunroom was one of the features that sold us on the house ( I have already talked about the attached root cellar). The sunroom runs the full length of the south face of the house, and captures solar heat quite well.  Large windows between the sunroom and the living space also admit lots of light during the winter. I might go in to more detail later on how and why I ended up rebuilding it, but that's another story.

Starting seeds in here- Because of how I designed the roof overhang, the room actually gets the least direct sunlight during summer, when you don't need it, and gets lots of light during winter and the "shoulder months". The problem is that during nights, temperatures can still get too cold for seedlings to germinate or thrive, so I have used heat mats in the past, but not enough. I will use them even more this time. They are powered through a thermostat, so only come on at night when needed.
Like this one:
http://www.johnnyseeds.com/p-7626-hydrofarm-seedling-heat-mat-20-x-48.aspx

A future project is to possibly install thermal blinds on the
large outer windows to close at night,  and fill some barrels with water to soak up heat during the day and release it during the night. Till then, I will unfortunately be using a lot of watts.

As I finally post this, the onion seeds have all germinated, and are looking good. Brassicas will be next to start in about two weeks.

Our first planting in the soil will be peas and potatoes, but the soil isn't quite ready for them yet. Can't wait!