winding down the garden season

Almost done with the garden this year. Still to do: harvest Brussels sprouts, plant garlic for next year, and lay down composted cow manure in the rows to mellow over winter. We've had a very wet fall, with the area having record flooding. Lucky for us, we are not in the flood plain, so no damage here, but it's been hard to work in the  garden or stay on top of mowing.

We are trying one more ( always one more!) thing this fall. Because of the slope of our land, and easily eroded silt soil in some areas, we do not till the entire garden. We leave sod everywhere except right in the row. It looks funny, and the rhizome like grasses constantly move back in to the rows, but it's the best thing to do if we want to keep our soil. So we mow our garden all summer.

The new thing is taking the flattest fourth of our garden, tilling it all up, and planting winter wheat.
Luckily, the heaviest rains finished before the tilling, but we've still had some erosion. I hand broadcasted, and raked in as best I could, aiming for one inch ( 25mm) of cover.

The wheat has sprouted, and the stand is not too bad for how it was done, I just hope it was thick enough to crowd out weeds next spring.

Because the rest of the garden areas are too steep to risk full tillage, this is the only place where we'll attempt it, so it will make our rotation scheme a bit tricky for the next year. We have come to realize that we are planting a bit too much for the two of us, anyway, so a 3/4 garden will also be a good move.

We'll hopefully be grinding our own wheat next summer. I'll report on how it goes.

The last of the root crops: Beets, cabbage, rutabagas, and parsnips for the root cellar. 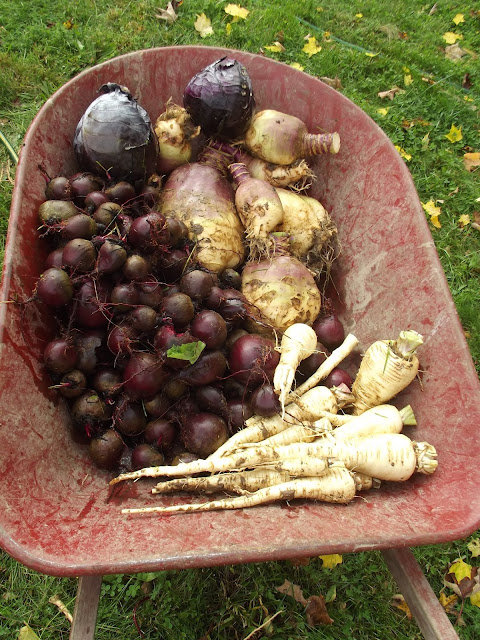 Our oldest laying hens are now 3 and one half years old. Our oldest rooster is also. While we have lost a few to undetermined illness, the losses have been rare and isolated, so I haven't felt the need to intervene. Overall, they are doing fine.

The old rooster though, has had it rougher than the hens. He's lost a claw or two in fights, and lost some comb to winter freezing.  He has been a good protector, and is pretty deferential to us humans.When he was young, he would lead the flock all over the place, from barnyard to south lawn of the house. All in all, a good rooster.

A couple younger rosters have slowly worn him down with challenges, and so this year, we have a new top rooster, and the old guy has been relegated to the fringes. Frankly, we have a couple too many roosters. Ongoing negotiations on whether to eat surplus roosters have stalled out.

The new top rooster however, is a bit selfish when finding food, and doesn't seem to be the guardian that the old fellow was. He also just hangs near the barn, leaving all the crickets, grasshoppers, and other potential goodies a bit further afield go to waste.

And of course, chases off the old guy when he tries to hang out with the flock. So the old fellow still comes down by the house, finding plenty to eat, and crowing every once in a while to let us know he is still on the job.


Interestingly, there is one hen that still follows him each day on his foraging rounds. They are both Black Australorps, and one could engage in some anthropomorphism and almost think of them as one of the bird species that mate for life. But chickens do not do that. 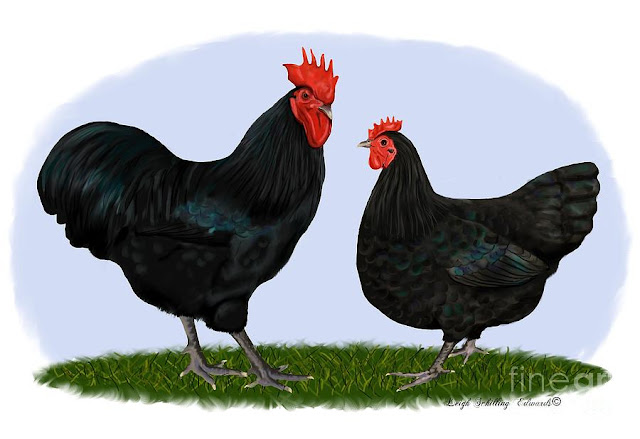 So why does this one hen still leave all the rest of her twenty odd sisters, and follow this old fellow around the farm?

Chickens seem to us to be a confounding mix of smart and stupid. In general, they do learn, and develop patterns that work for them, but any new twist can really cause them to lose it. Maybe we aren't all that different??

My mind wanders while doing the daily farm chores, and one thing I've wondered this fall is, why that one hen?

What extra little brain activity, genetic variation,  or chance occurrence caused her and only her to stray from the flock and hang with the deposed leader? Is it more than pure statistical probability?

There is still so much we don't know about our own brain workings, that it seems a bit presumptuous to declare that this or that animal is not thinking, or that it is complex "instinct" we see and no more.

Intelligence, or sapience is obviously a spectrum, and a dog is clearly "smarter" than a chicken, but maybe intelligence is composed of many more variables and axes of progressive change than we currently envision?

I am sure tempted to think that that one hen is just smarter than all the others.


( not my chickens, just an image of black australorps from the internet) 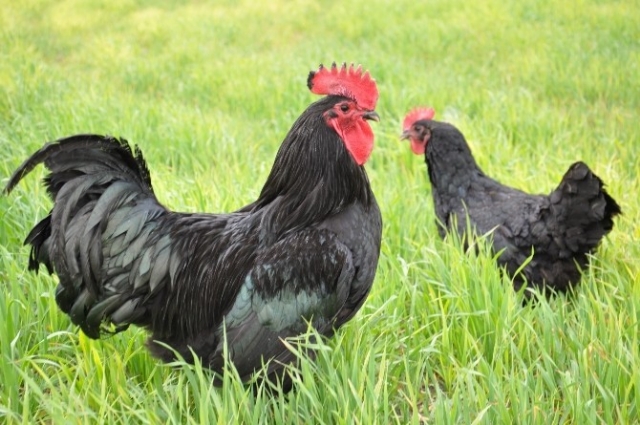