My last post was about tapping trees for sap, to make syrup.  It was a good productive year, with good weather , but what else might account for it? It got me to thinking about nature's patterns, and how out of tune we are to noticing all the harbingers and cause and effect relationships all around us. Some are easy, and we still recognize them, but how many others are more subtle, or of a time scale we aren't able to follow?

An example: I know that the mast crop trees ( nuts, acorns) have an odd cycle, some years with lots of crop, others not so much. It seems like weather is not the only variable affecting the output, but even scientists aren't sure, thought they have some theories.

Are there some signs for the cycle that we just haven't picked up on yet?

Layman speculation alert: someone probably already knows this, but here are my thoughts on how we got here.

Our big homo sapiens brains have the ability to store a lot of memories, and maybe that was our Darwinian tradeoff for loss of keen senses. Maybe our compulsion to find patterns, coupled with the big memory, enables our forebears to remember locations and timing of food, anticipate fruiting, and in general survive even better than if they still had the ears of a deer, or eyes of a hawk. I know the big brains are also thought to have evolved to enable managing complex tribal relationships, but you still have to eat!

In fact, we got so good at it, we figured out the life cycle of certain plants, patterns of a few animals, and ended up doing agriculture, complete with seed saving and animal selective breeding. So recognizing many of the natural patterns in the "wild" became less important.

I usually attempt to keep science front and center,  so I think we need to distinguish between harbingers and causative agents. There is folk lore that wooly worm's color can indicate how severe the coming winter can be. While I don't think this is a real correlation, it would be considered a harbinger, as I doubt wooly worm color can make the polar vortex shift south! Other things would be more like a cause and effect, if we can only notice the patterns that repeat and hopefully understand the mechanism involved.

The Fox Fire series of books collected lore from pioneers and settlers in the Appalachian mountains, and much lore like that of the wooly worm sign existed, but how much of it was based on real cause and effect, and how much was coincidence or bunk? 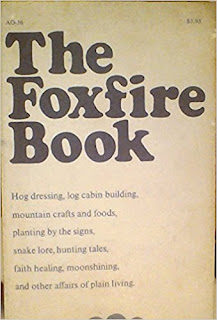 Maybe there really are deeper senses, other species tune to a vibration we will never sense, or have grown deaf to. We now know that some birds and insects actually navigate for their migrations by sensing the earth's magnetic field. Wow. What other signals are we blind to?
https://www.decodedscience.org/animal-magnetism-magnetic-field-influences-animal-navigation/50745

One challenge for us is that some patterns are long in playing out. Long time span pattern recognition would really require good memory and patience. We know that some cicadas go 17 years between emerging. Good to know if you like to eat them and can count ( and don't starve in the mean time). What other long term or multi step patterns are there that we haven't recognized yet?

What might the application to sustainable food production be? Well, if we are to try use less fossil fuels, to work more in concert with natural systems, then tuning in to the various cause and effect patterns will be very useful.

This past year, a large ( I thought) healthy black cherry tree died. Over the course of several months, I saw where woodpeckers began to chip off the bark, obviously going after insects. Was there an earlier sign of disease that I didn't notice or even recognize? Did the insects infest and kill the tree, or were they opportunists, bypassing the normal defenses that waned after a disease was already killing the tree? If I had the habit of actually looking at all the trees and plants around me as part of my daily routine, might I be able over time to catch the patterns, the signs of disease, of changes important to me and my farm?

I think I need to pay more attention.