Permaculture's third principle as identified by David Holmgren is "Obtain a yield". Makes sense; of course you need to get some net positive return for efforts, or you as an individual won't last long, and extending to a group or species, you will go extinct. There is a lot packed in to that principle though.

How do you decide how much of the annual bounty of growth is yield? If one is striving for a sustainable, long term system, how can you tell whether you are raking off too much yield, and degrading the future? The direct input output of our garden, for example, would typically account for the human hours expended, some dollars spent on seed, gas for the tiller, electricity for the well pump, and maybe even some accounting of depreciation for the aging of the tiller. But what about the state of the groundwater table, the nutrient levels in the soul, the disturbance of the soil microbial community, the tilth, organic content, the area biodiversity, even the oil wells in the middle east that the gasoline came from? One could go on and on a long time, noting the admittedly small, but non zero impacts of our tomatoes and sweet corn on the wider world. And much of it does not come down to dollars and labor hours. Nature does a different sort of accounting than man, and cares not about dollars or quarterly earnings.

Ecosystems are very complex, and for that matter, not static, but changing all the time, mostly on a time scale hard for us to see. One pattern that ecologists have identified is that in natural systems, there are often some niches that have less redundancy that others, or provide a critical service, such that the behavior of a single species has outsized impact on the overall ecosystem. These are called keystone species, because they kind of make the system work, similar to a keystone in an arch making the arch structurally sound. The Wikipedia entry does not mention humans as a keystone species, but to my mind we are, and have been altering the landscape to our and other species mutual benefit for a lot longer than recorded history.

Unfortunately, we went rogue a few hundred years ago, learning to take much more than a sustainable  share of the annual solar driven yield, so we have been destabilizing the ecosystems all around the world. This trend only got worse after we started using stored fossil carbon energy to really overshoot the planet's capacity. The only humans who are in balance with their surroundings these days are extremely few, and are derided as primitive.

Can we, like the prodigal son, come back home? Whether mother earth "forgives" us or not, can we gain enough wisdom and regain our integrated relationship and stop the dissipating, adversarial relationship to our ecosystem? Since the 70's, ( and even before, really) some have seen and spoken out about the wrong path we are on, and now, in the 21st century, there seems to be a renewed call for change, so there is no longer an excuse of ignorance. Really, the obvious signs of degradation are hard to deny at this point. Simply because of the end of the fossil fuel era, we are in the early stages of overshoot returning to baseline, but it could be so much less traumatic if we quickly and willingly transition to collaborative ways to work in natural systems to meet our needs. We are beginning the return to a low energy life one way or the other.

My wife and I are slowly learning how to create a stable, sustainable homestead, and learn skills that we all will need in the generations to come. Permaculture is a mental template or set of guidelines for doing so.

In the mean time, about obtaining a yield, here are a couple photos from our garden harvest this year. Yes, I know that these annuals, in a garden that I rototilled and watered all summer, so are a few steps removed from a permaculture ideal. But we also added over 1000 hazels to the main field this year, so we are making progress.

Here are the potatoes in the bin I just built, still using cedar scraps from the sunroom rebuild two years ago. These were from seed potatoes we saved from last year's harvest, and they did quite well. 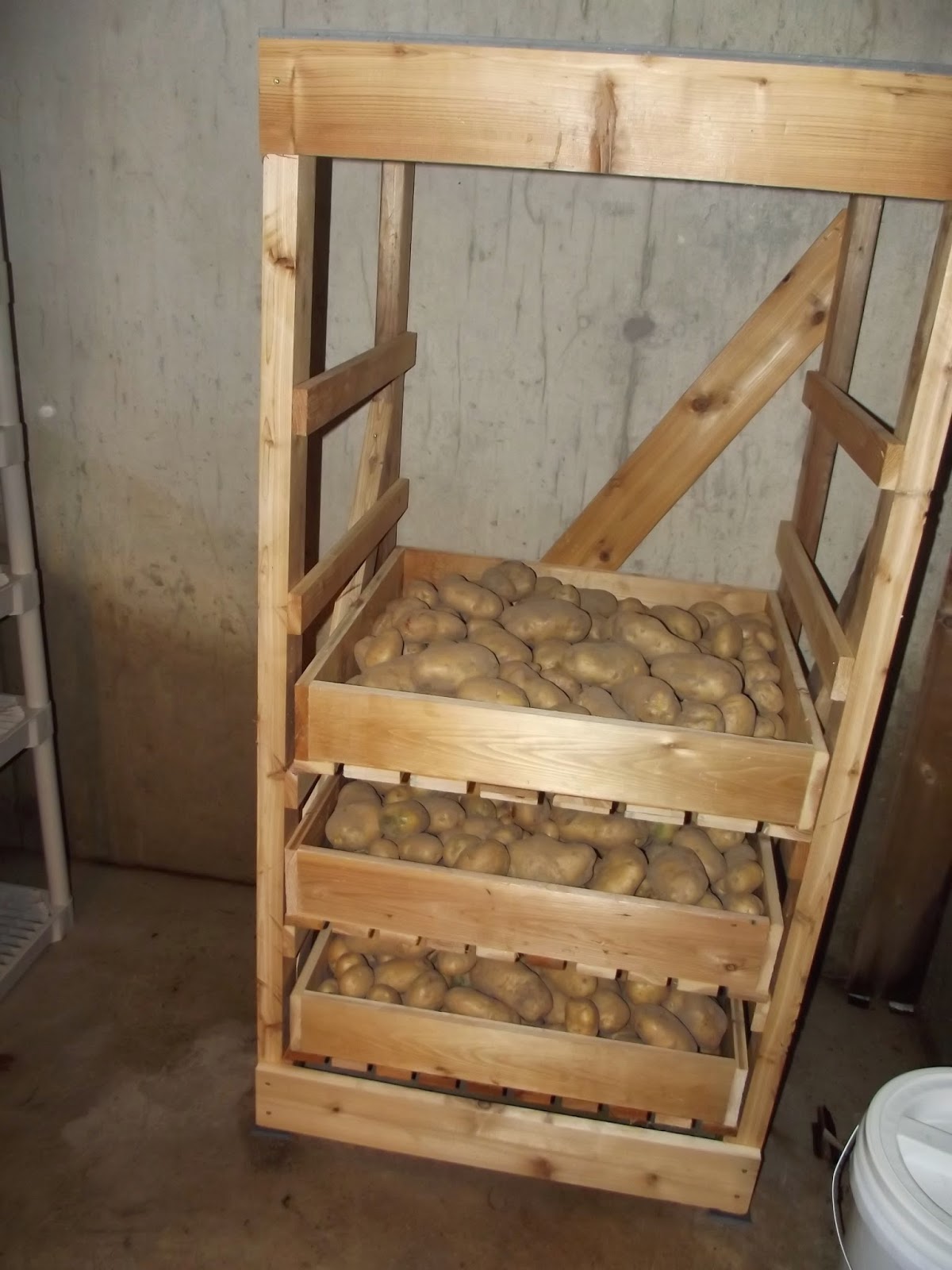 And here is the last of the collards. We will be eating a lot of collards this winter. They are great in soups. Patsy is dehydrating some, blanching and freezing some. 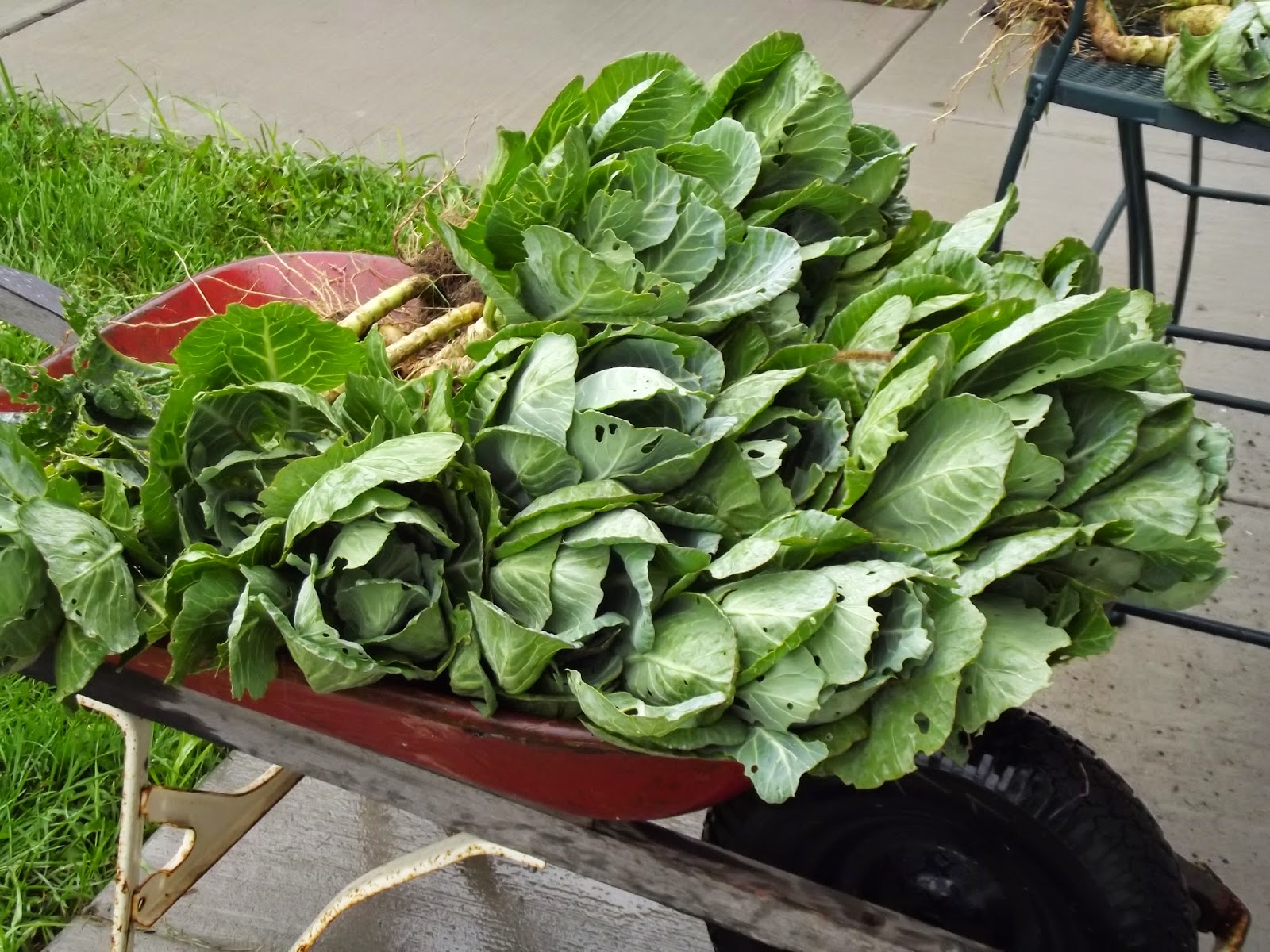 Posted by Steve Carrow at 9:39 AM No comments: