This fall, I'm working on two new skills. As I mentioned in the last post, we are having a huge apple year, and have already bottled one batch of cider, with a couple more planned as the next varieties ripen.

I am also trying to make soap the old fashioned way, with pig lard and wood ashes. Anyone who is familiar with the foxfire book series ( https://www.foxfire.org/about-foxfire/#history ) knows that early pioneers in the American wilderness had to make a lot of their day to day essentials, and making soap was one of those things that was cheaper than buying if it was even available.

Mix lye, water and any type of fat in the right proportions, and you can make soap. Most homemade soap these days is made with purchased lye and various vegetable oils or goat milk. I wanted to try the old school, no "store boughten" ingredients.

Here is my setup to leach lye out of the wood ashes I've been saving for a couple years. 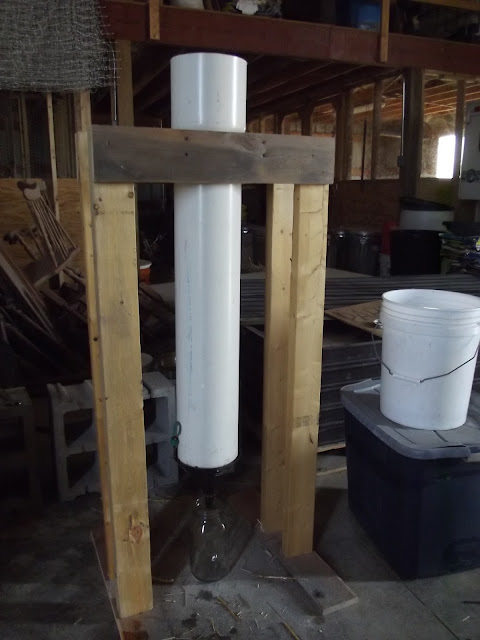 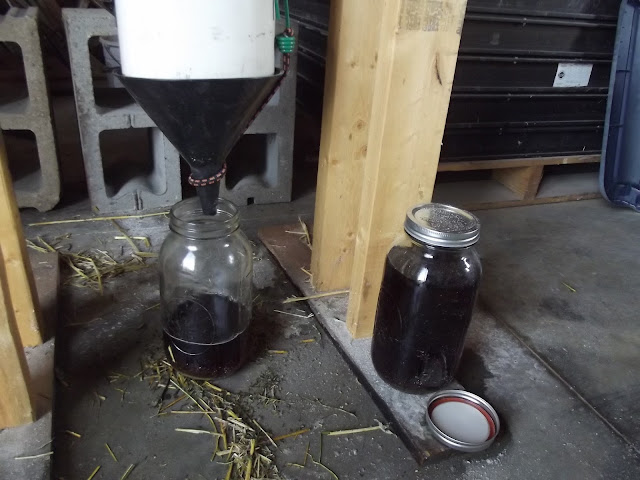 In times past, they would have filled a hollow tree log, or made a wooden bin with a sloped collection trough underneath to catch the lye dripping out the bottom. Straw or some crude filtering material was used to keep the ashes in, but let the liquid drip past. While I used an old scrap piece of PVC pipe, I did use straw for the bottom filter media.

First, I sifted all the small bits of charcoal out of the ashes, then filled the pipe with ashes. 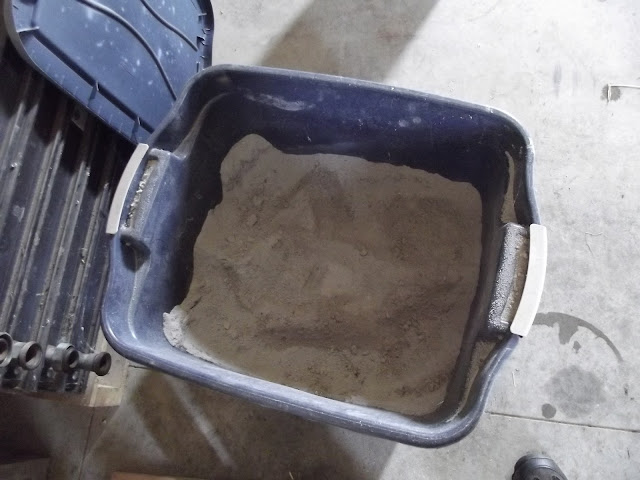 The last time we bought a pig from a neighbor ( We didn't butcher it, the local locker did. Maybe next time? ), I asked for the lard to be saved. Turns out there wasn't that much, but I rendered it out easily enough. Slow and easy is the trick.  Not sure if the pig was just lean, or the butcher didn't save as much as he could have.

On the cider side of things, our cider making turned out well this fall. I actually followed a recipe. For a 5 gallon batch, I first killed the wild yeast with Campden tablets, then used purchased champagne yeast and then a lot of brown sugar. Ending alcohol content was around 4.5%, but the taste was tart, dry, and had a clean aftertaste.

Here was one batch during fermentation. 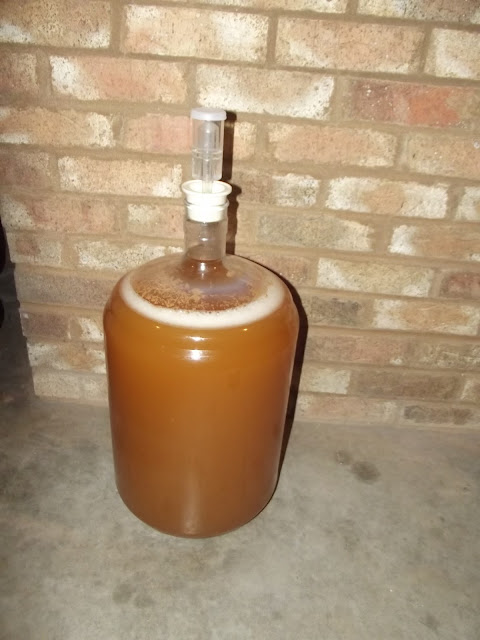 We used cleaned and sanitized beer bottles we had been saving, and capped with a simple capper.

Posted by Steve Carrow at 4:08 PM No comments:

Horatio Alger is famous for the many novels he wrote that conveyed the idea that hard work  and moxie would result in a rags to riches ( or at least middle class) success, that is, a slice of the American Dream.

Unfortunately, while many Americans believe we are still the land of opportunity, and are exceptional, it is not the case.

We have become as class stratified as many other countries we think ourselves superior to, and data confirms this.

When  combined with the fact that America has a poor gini index, I see the potential for troubled times ahead. Gini index is a calculation of how evenly, or equitably income is distributed through the population. A zero index mean everyone has exactly the same income, and a one would be all income to one person, and nothing to everyone one else. Obviously, there are no ones, but comparisons and trends still can tell us how GNP is being shared.

Gini index does not tell the whole story, as a nation could be desperately poor, but very equitable about it, for  zero score, but that isn't a situation to strive for. 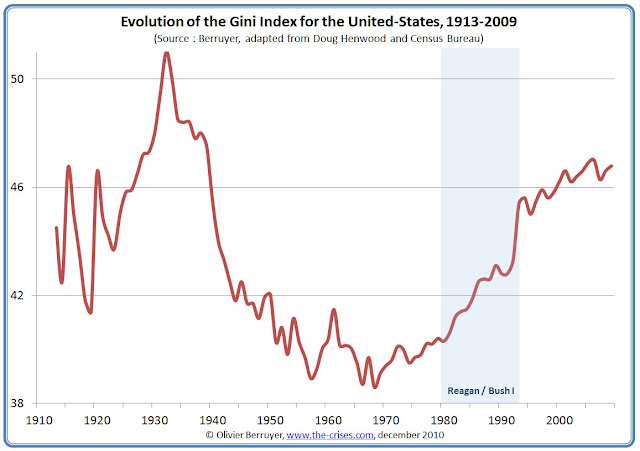 You can see the run up in the late 20s and 30s, till speculation and overreach caused the great depression( OK, it was a bit more complicated than that  http://www.ushistory.org/us/48.asp) at which point things remained more equal with help from the New Deal and WW2, but took off again in the 80s.

That chart shows the evolution of the U.S. gini index over time, but how does the U.S. compare to the rest of the world? Well, it turns out from my brief study, it is complicated. Data from many countries is suspect, or calculated differently, or spotty and out of date, so it's hard to do comparisons. Just generally, from the sites I did find, the U.S. is rather high compared to the developed countries, but I saw several different results. Here is one. 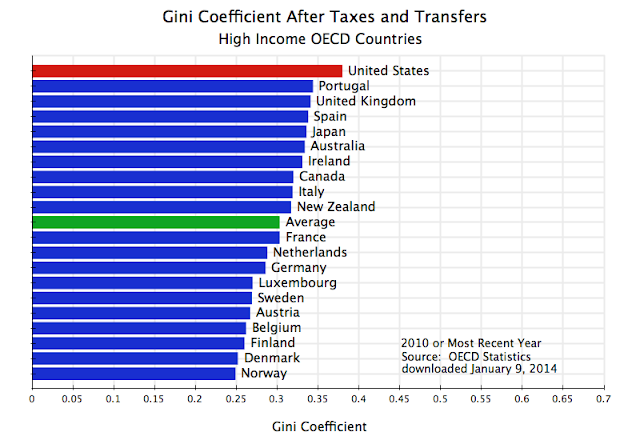 So what made me look in to this?

I was traveling a while ago, and picked up a Wall Street Journal for the first time in several years. It still is the paper of record for the wealthy and the elite. After I skimmed through the headlines and main section, I found a section headed "Mansion". I thought, weird, some sort of special edition? No, it turns out that this is now the header for the WSJ real estate section. And it's just what you would think, a real estate section focussed on only the very top of the housing market, and the woes of trying to find that perfect mansion.

Most intriguing and maybe telling for what is on the minds of the wealthy, there was an article titled "Luxury for the Apocalypse". It described a large planned community going in in Texas that was comprised of underground condos, with a secure perimeter and many self reliance features. There are similar ones in development in other states as well.

In the past, and not just here in the U.S., when there is too much inequity in society, revolt, violence, and rebellion can occur. At some point, it doesn't take gini comparisons, or other data crunching, it is in the wind. Sometimes you don't need a weatherman to know which way the wind blows.  The wealthy are aware of this, even as they continue to work the system.

So, what's a poor working stiff to do? Pay attention to history, and plan accordingly.


Posted by Steve Carrow at 5:48 PM No comments:

out with the old, in with the new

A while back ( Dec 2016) I posted about the demographics of farmers, and the possibility that we might be seeing the early stages of a resettling of Americas rural areas. The article at the link seems to indicate others are seeing the same thing.

One point I did not make before, is that in addition to relearning farming with low input, sustainable techniques, many of these new urban to rural migrants were not raised on farms, so have even more to learn and will unfortunately have higher failure rates than if they had started from conventional farming.

On top of that, access to land, capital to buy land, are both hard to get. Even back in the 70s, my dad said that to be a farmer, you had to either be born to a farm family, or marry in to a farm family.


We haven't reached that point where fossil energy is cost prohibitive and human and animal labor move to the fore yet,  and it may be quite a ways off, but it is inevitable. Once this trend is further along, many more farmers will be needed.

Posted by Steve Carrow at 4:38 PM No comments: