Our primary winter heating is with firewood, in our Russian furnace. ( masonry stove).

I cut and split my own firewood, using a chain saw for felling and bucking, and a maul for splitting.

I have been doing a bit of cross cut saw bucking ( cutting logs to firewood lengths), but am starting to get more serious about it. It's just one more step toward using less fossil fuels, and getting "functional exercise". I bought a new crosscut saw on line, and it works ok, but recently got an old one to add to my kit.

Turns out that sharpening a crosscut saw is more technical than I had realized. The definitive instructions are at this location, and what I have used for reference.

I am taking a couple short cuts to their complete sharpening system, ( sharpening a saw correctly is time consuming!) but after I get better at filing, I may spring for the jointer tool, and try swaging the raker teeth that need it.

To be clear, I am no expert yet, and have a ways to go, but am sharing what I've learned so far.

Here is my homemade saw vise. I copied the design from a friend who crosscut saws and is good at improvising quick and functional tools. This is an old crosscut saw I was able to acquire that was still in pretty good shape. It had a few teeth that had not been sharpened correctly, but mostly I was just resharpening teeth that had dulled. 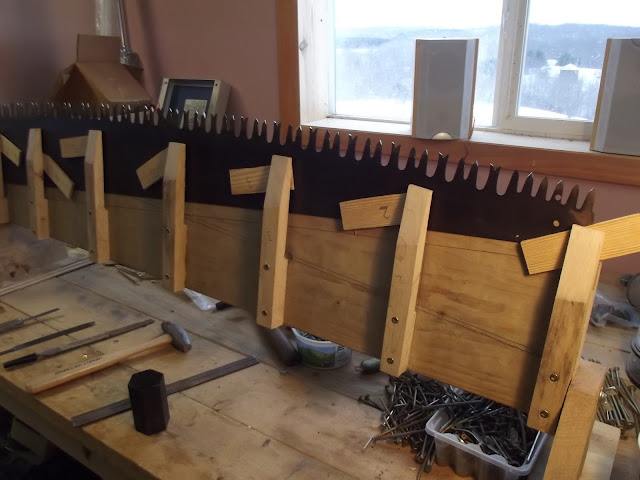 One end of the vise. You can see the wing nut and support stand. The vise can be tilted to out of vertical to one side or the other if desired for better angle for filing. This saw has Tuttle, or Champion tooth pattern, better for cutting hardwoods. 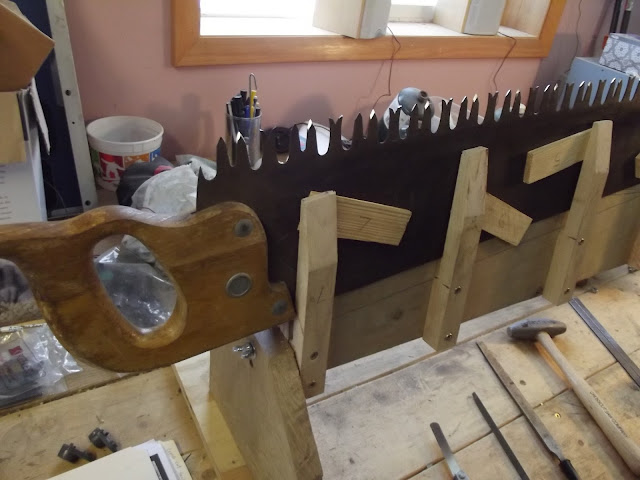 From left to right:
a spider, used to check the cutting teeth offset.

A feeler gauge, used to adjust the spider, and to check the projection of the cutting teeth past the raker teeth.

A triangular file, for dressing the underside of the raker teeth.

A flat file, for sharpening the raker teeth tops and the cutting teeth.

A mini anvil, used with the hammer to make the offset bend in the cutting teeth. 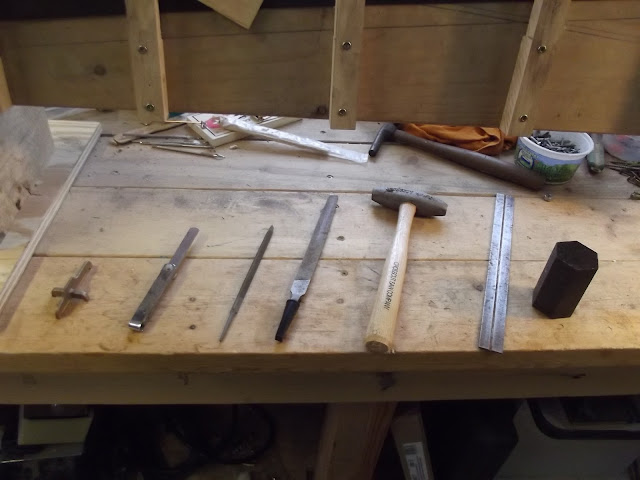 I am not ready to fell trees with a crosscut yet, but might work toward that if I practice two man sawing with a friend. I also acquired a felling saw, but it needs a lot of work, so it will be a while before it's ready to cut.

I guess it's obvious, but buck the wood while it's still green! I have some dead elm and a few seasoned logs that didn't get bucked when green, so I will use my chainsaw on them.

One more thing I learned, is that a "normal" saw buck stand as found on the internet is too low for crosscut sawing. To prevent hunching over while sawing, the log needs to be up higher off the ground than you might get away with using a chainsaw. This also makes the base wider, which helps resist the side thrust that crosscut sawing causes, unlike chainsawing. I had made a sawbuck a few years ago for use with my chainsaw, but just added leg extensions to it, to much better effect on my back. This is the design I built, but have since raised it a good two feet( .6m).