Just recently got back from a long car trip to California to visit our son. Shot our carbon footprint stats all to hell, but that is another discussion. We car camped, stayed with friends, and did a combination of knocking of the miles on interstates, and getting on to state roads to get closer to the real America. Yeah, I know, happy motoring a la Kunstler, but we want to stay connected to our son as best we can across the miles. Not sure how long people will be able to do this, but for now, we can.

Saw some of the typical amazing scenery that can't be captured in snapshots, saw endless miles of uninhabitable dry terrain, and saw much of the industrial but unsustainable ag that feeds us all.

Coming through the Tehachapi pass, we of course saw all the various wind turbines, from the latest large designs, to some of the original clunky tax shelters. Due to a very old road atlas, and refusal to use GPS, we ended up coming out of the hills on a state road that we had no idea where it would lead. We never did find the campground we were hunting. So what ended up happening was we came through the town of Arvin, down at the southern end of the San Joaquin Valley, America's salad bowl and supplier of year round fruits and veggies.

We have all been hearing for months now about the severe, once in a century ( or epoch?)  drought hitting California, so it was a bit surprising to see what appeared to be business as usual. Mile after mile of fruit trees, nut trees, grape vines, vegetable fields, all irrigated. There were even CAFO dairy operations sprinkled in to the mix, with semi loads of big bale hay trucked in and stacked ~20' high. Not sure were the manure was going or how it was handled. I have to say, it was all impressive and looked well run and organized.

The town of Arvin is ~90% Hispanic, ~30% under the poverty line, and is of course where those who farm the land live. Leaving town, we saw the occasional walled compound out in the fields, no doubt the original farmhouses of the actual landowners.

As we sped north, we began to see less irrigation, more and more dry, fallow, and unfarmed land. As the land would look without all the water from Colorado and the Sierras. This is what it will all look like when irrigation is no longer viable. Not sure if these fields were out of production because of the current drought, or if this was just too far to run the irrigation canals, but it was not a place I'd want to live. It was a good reminder of how fragile the current industrial ag system is, and how little it would take for much of the country to be cut off from much of its food supply.

On the way back, we saw long stretches in Nebraska in more traditional corn, but irrigated. I don't know if it was Ogalalla water, but based on the location, it probably was. That is ending soon as well.

Plant your gardens, eat seasonally, put up preserves, get busy relearning the way we ate before California fed us all.

Here is just one shot of the desolation, as we were leaving the San Joaquin Valley, and heading toward the hills and the Coast. 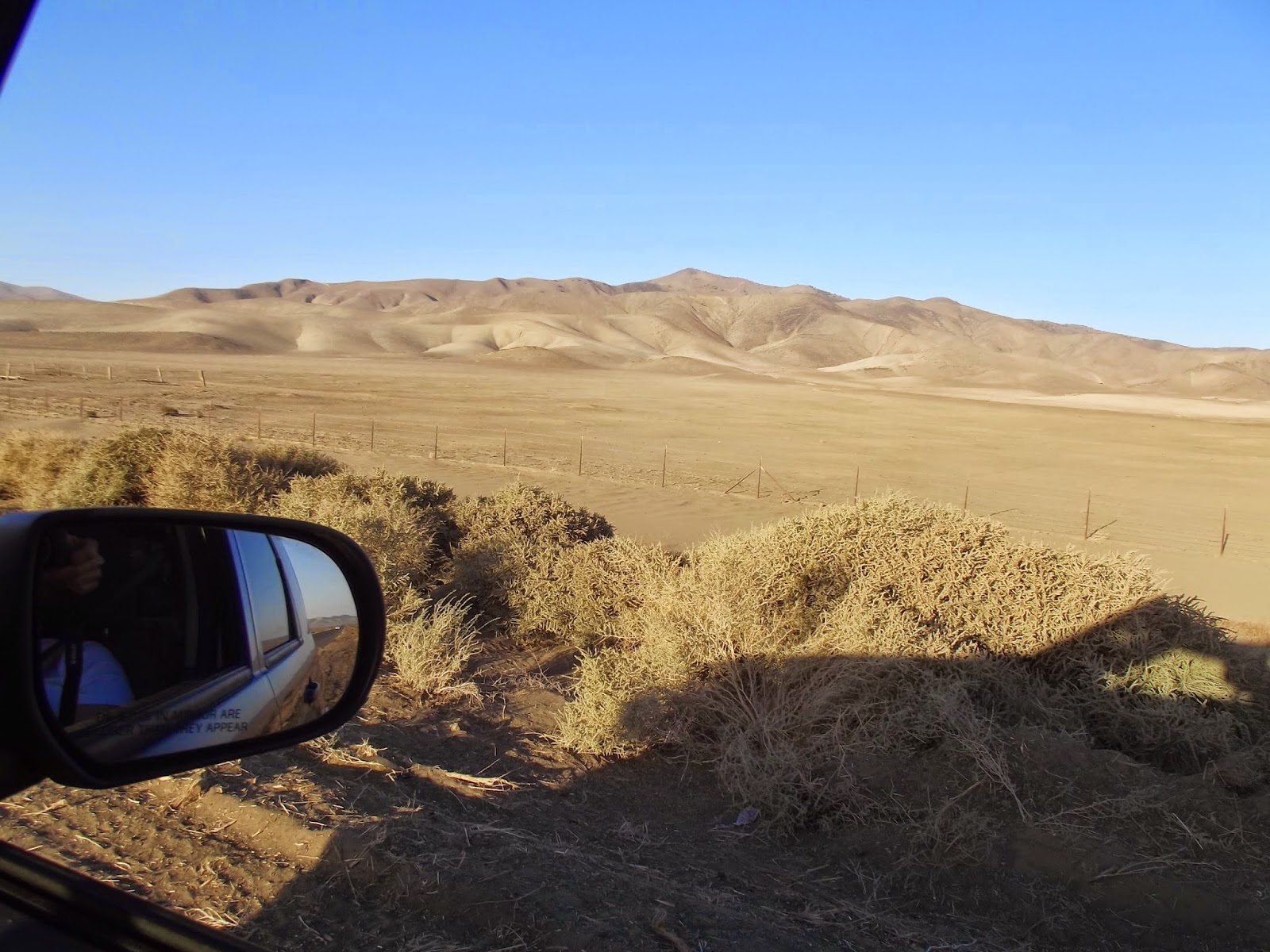 Posted by Steve Carrow at 6:19 PM No comments: