There is a young organization here in Wisconsin that is promoting perennial agriculture. Since I am trying to informally use a permaculture approach to our land, I decided to go see what others in the area are doing. The Savannah Institute hosted a gathering for permaculture approaches to food production couple months ago, so I signed up. ( I'm just now posting this!)

My first impression was, there are a lot of people here! Sometimes, when we chose an interest or specific path in life, it might seem eclectic or lonely, but the internet has enabled a lot of people to connect with their tribe(s). We are of course a tribal species. And let's face it, alternatives to conventional agriculture have been ascendant lately, so I thought the showing was good.

Second impression, since I knew no one there, was that there was a kind of "look" to the assemblage. Kind of farmer hipster look? Not suburban, but not full on bibs or clodhoppers? Or maybe I'm just out of touch on fashion for younger generations who also happen to be drawn to the land. Dunno.

I saw mostly young folks, but a few grey hairs sprinkled though the group. The oldsters were  pioneers, early adopters of sustainable food production methods. Good on them. The younger folks seemed to be very networked, and of course, full of enthusiasm, but short on resources to see their plans come to fruition very quickly.

Other thoughts on reflecting on the two days: There was a lot of enthusiasm there, both in the younger set, but also in the older folks, who were happy to see others taking up the quest. Farming is hard work, and trying to step away from conventional food production is even harder, but it felt like many there were "mission driven", to borrow a phrase.

The system as it works right now does not make it easy to acquire access to land, either conventional or alternative ways of growing food and stewarding the land. So these young folks have a tough row to hoe, so to speak. I wish them well, as they are the future.

The road not taken

Just got back from a train trip from our home in Wisconsin to California and back. We took the route that goes through the Sierra Nevada mountains, and then on in to the bay area.

Sometimes we were next to the interstate, and sometimes, we were off on our own. Had a bit of trouble getting through the deep snow, ended up stopping in Reno, bussing the rest of the way.

Got me to thinking about the condition of the rail system, and what it could have been.

Its genesis could be said to have started with Dwight Eisenhower in 1919. He was part of a cross country Army convoy, to assess military mobility and status of the existing roads. It was a disaster, and the roads at the time were pretty bad, making quite an impression on him.

So, when he later was president during the cold war, the perceived need to easily evacuate cities and mobilize military forces prompted the creation of the Interstate Highway system. Signed in 1956, it took 35 years and almost $500,000,000,000 to build. ( that's with a B)

It created a lot of jobs and spurred economic growth, but what if he had championed another solution?

What if he had decided that the better choice was to upgrade the rail system, and overlay that on the nation's terrain instead of highways? After all, a lot of the right of ways were already secured.

It might have gone like this:
- a network of rails similar in arrangement to the interstate.
- upgraded rails, with a couple more tracks on each route, with beefed up bridges and rail-bed capacity.
-intermodal hubs to enable quick offload to trucking for the final miles to destinations.
-modified curves and bed stability to allow speeds up to 100MPH, maybe more.

And here would be the positive side effects if this option had been taken.
-more energy efficient freight hauling with large energy and money savings resulting.
-cheaper highway system, with much less semi truck traffic to tear it up, and lower load capacities, with cheaper construction and maintenance costs.
- a better infrastructure to piggy back passenger train travel, making for fewer car trips needed.
- probably less air travel, both for freight and for passenger travel.
- traffic in between towns would revitalize small towns, most of which now are bypassed by interstates.
A couple shots of our trip through the Sierras ( sorry for poor quality, overcast and through a train window) Hard to tell scale, but these cuts through the drifts were done with giant snow blowers, and the cut is higher than my head in most places, and about ten feet in a few places. 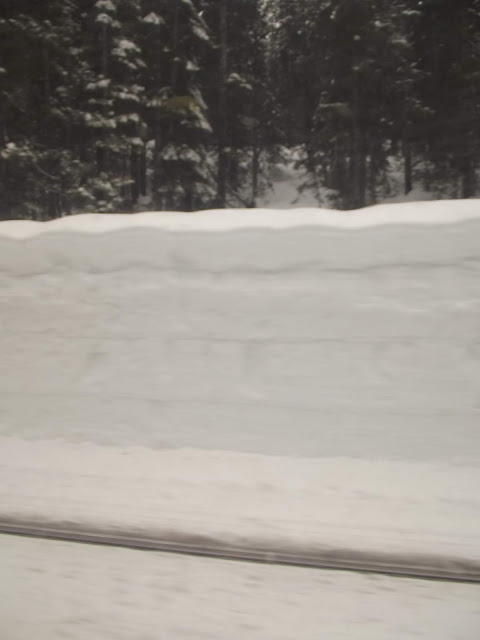