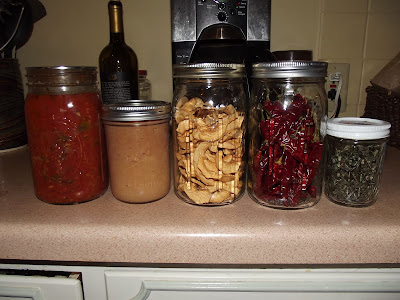 Here is a photo I took representative of food we preserved this year. Left to right,

the pasta sauce was from our tomatoes, onions, garlic, and some CSA green peppers. Patsy did some large batches of canning this summer, boiling a lot of the tomatoes down to sauce, so we'd use less jars, and to be quicker to use.
The next, apples sauce, was from our big year for apples. We have lots of apple trees on the farm, but did not know which were good, and have only just begun to prune them back in to health. This was for reasons that I still don't recognize, a big year for apples in our neck of the woods. With the big year, we now know which are good for eating, and had so many we only preserved a fraction of them.

Apple slices, dehydrated and stored in jars, was another way to save some of the big crop. We don't bother with dipping them in some solution to prevent browning. Just doesn't matter to us. I will be interested to see how they taste when rehydrated, compared to storebought dried apple. So far we've been working on the frozen apple slices, and the apple sauce, so haven't tried the dried ones yet.

We grew entirely too many cayenne peppers this year, here is one jar of the dried peppers. I've made some fermented hot sauce that turned out well ( well, two out of three batches did) and I've ground some of the dried pods ( less seeds) to powder. We will grow more green and mild peppers next year, but a few cayenne as well.

Patsy has been experimenting with herbs. This jar has mint leaves, which she will try to use in tea.

Just making the seed list now for this spring, so it won't be that long till the lights and heating pads get set up again in the basement.
Posted by Steve Carrow at 10:57 AM No comments:

Oh yeah, the throne in the works 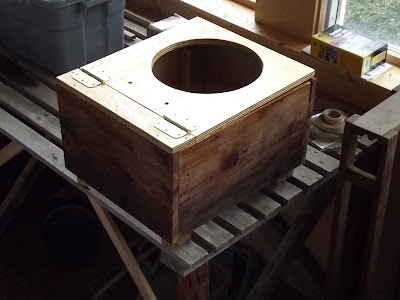 Working on the composting toilet, here it is drying in the sunroom after I gave the wood a good coating of urethane. Still making things out of left over materials from the prior projects. (I did have to buy the plastic buckets).

I have a small store of sawdust to get rolling, but need to secure a free, substantial source. Negotiations are underway regarding where exactly the toilet will be located........
Trial run was in the garage, which was rather chilly.
Posted by Steve Carrow at 8:23 PM No comments: