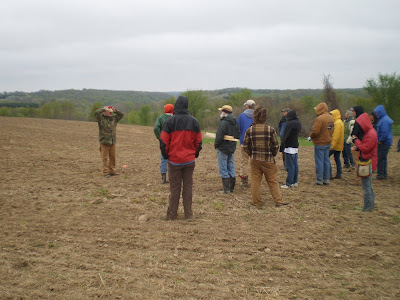 Another three months, another entry. I'm not giving up yet. Here is a photo from the Mark Shepard led workshop on keyline water swale layout. This was an unusually cool day in late spring. A large turnout, at around 30 people. We are in our field just after Bob had planted the oats and hay mix. The concept is that swales are cut in along contour lines to catch any water that may flow overland, and in areas where water is concentrating toward a gully, slope the swales away from the gully to spread the water back out and give it more time to soak in.

These swales are also where you plant trees and other perennials so they get a bit more water without irrigation. Any future row crops will have to be planted along the contour lines, between the ditches. We'll actually cut in the ditches this September, after the oats are taken and the hay has hopefully taken hold.

Posted by Steve Carrow at 7:54 PM No comments: