The Great Law of the Iroquois is said to be the origin of the admonition to think of seven future generations in any decision made now. More generally, deliberations of the leaders are to consider the whole community, the whole nation, and not be swayed by relatives or other personal benefit. To a rough approximation, this was considered 140 years. Seven generations might be a bit longer here in the developed world right now, as people are waiting a bit longer to start families. Let's say 150 years.

When political and economic policy discussions circle around to "sustainable" these days, I think we have become too lax in confirming that we all have a common definition of "sustainable". When you start trying to pin it down, lots of assumptions have to be made. The devil is in the details, as always. But what if we used 150 years for a thought experiment.

All the infrastructure, all the manufactured goods, all the energy sources, all aspects of our busy, comfortable lives would need to be fully replaceable ( and presumably with no reduction in ability to continue replenishment)  over 150 years if we were to try to meet this criteria.

Does anyone think we are on track to meet this target? Of course, we aren't even on a stable, level track of population, consumption, or average consumption. In my estimation, if we ( it ain't going to happen, but IF we did) stopped growth right now, and merely projected current population, resource use and impact on our planet, could we make it 150 years? The answer is no, in case you were not sure. Forget fossil fuels, which draw the most attention. Many other key inputs in to our economy are nonrenewable resources, with dwindling easily obtained stores. Many metrics on the state of the ecological health of the planet are trending down, and some are close to collapse.

For those thinking that raised costs will bring newly economic resources to market, this only works to a point. Demand for some items is inelastic, and there are some resources that don't react to the substitution effect like the economic alchemists and philosophers would like to think.

So current lifestyle in the developed world, and especially the U.S., is not sustainable by this seven generations definition. Probably by any definition. To reach that level would be the end of the world as we know it. And yet, Some cultures in the past lasted for centuries, though they eventually declined. Life would not have to be nasty, brutish and short, but would be quite a bit different. We have the germ theory of disease now! Maybe we could figure out a way that was not so bad?

Nah, probably not going to happen. Not sure if it is too late to change course, though many are sounding the alarms and trying to do so. I wish them luck in grabbing the wheel and pulling a hard u-turn.

My personal response to the dilemma we face is to plant trees. Trees can be used for building materials, stabilize soils and moderate microclimates, they suck CO2 from the air, produce food for humans, as well being the backbone of a system that provides food and habitat for a complete ecological community. All for free!

Here is a Handy list of average tree lifespans. It's for Virginia, so my neighborhood in Wisconsin would be a bit different, but close enough.
http://bigtree.cnre.vt.edu/lifespan.html

Some of the oaks I planted in tree tubes last year. Without the tubes, the deer will kill them all. 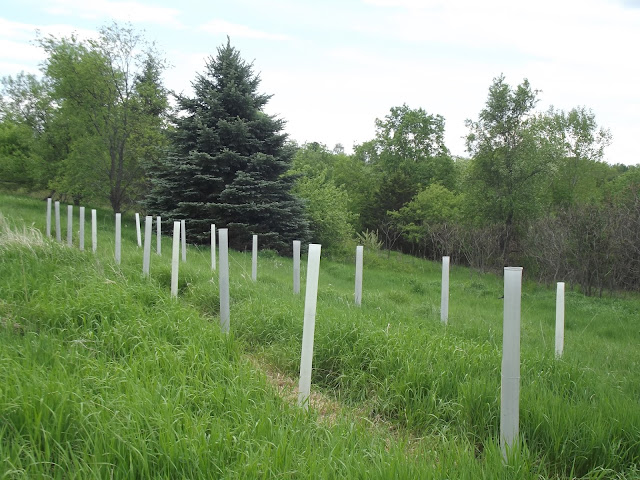