Cornish Cross is a chicken breed that has been specially selected to grow very quickly. It is the chicken you buy in the grocery store.

Last year, our first batch of chickens were dual purpose birds, good at free ranging, and laying eggs as well as a reasonable meat bird. The roosters went in the freezer, but it took around 12 weeks to get to a reasonable weight, and the meat was on the tough side because of their age. Fine for canning, stews, and the like, but not as good for frying or roasting. The hens are still doing fine with egg production, so this year we decided to just get some meat birds, and get it over quickly.

Cornish Cross are known for their lethargic, unchickenlike behavior, as well as the fast weight gains, and they did not disappoint. In a way it was comical, as they lay around a lot, waiting for meal time, and they never did take to the roost I provided.

My wife and I butchered the 25 cockerels at the end of eight weeks, when live weights reached six to seven pounds.

I was careful to only feed them per the instructions with the feed, or they would have had leg problems and be prone to heart attacks. I actually weighed the feed each day, and the feed trough was picked clean every single time by the next meal. Our layers never do completely clean up the feed, and are constantly out foraging, and have used the roost from a very young age.

The chickens are tasty and tender, and we may well do them again, while keeping our foraging layers going as well. Probably next year the by then "old" hens will be bound for the stew pot.

If anything, turkeys are even dumber than the Cornish Cross. We raised the broad breasted bronze. WE kept them separate from the chickens till they were around eight weeks old, having heard about black head and coccidiosis.  They seemed to have more of a flocking instinct than chickens, and like to go hang out with the hens, or follow where the rooster leads. We might try a heritage breed next year.

I butchered our four turkeys around three weeks ago. This was another first, as I had never done turkeys before. Found out our scalding pot was just big enough for a turkey. We got lucky on that, as I hadn't thought about turkeys when selecting it. The tom weighed in at 22 pounds (10kg). 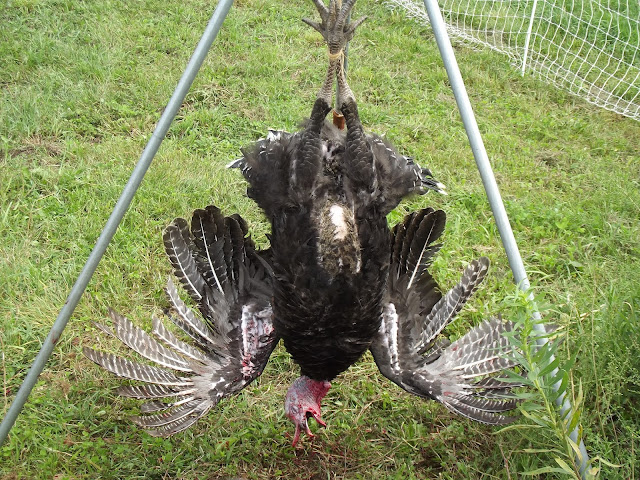