link to Harmony Valley Farm, where Bri will start working in April.
http://www.harmonyvalleyfarm.com/

It's about a 40 minute drive from the house, but with the job market, it's a good deal.
Oh, and here is a cute picture of Bri's cat. It seems to forget where it's tongue is sometime. 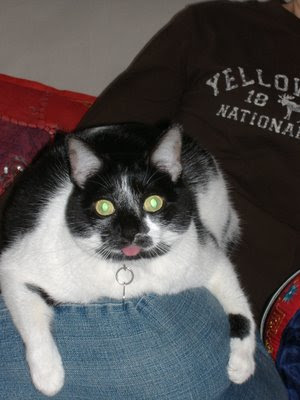 Any arborists out there? 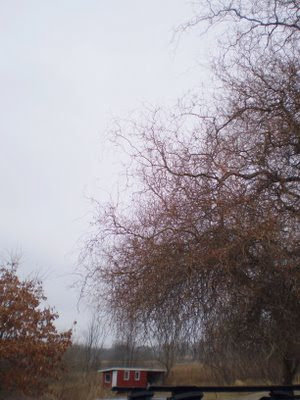 So, I'm wondering if anyone knows what kind of tree this is? It is next to the Wisconsin house, and it has unusual snaky, thick masses of branches. 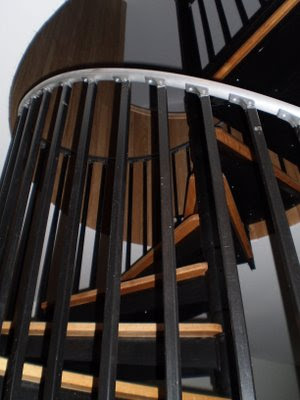 Here is a picture of the spiral stair up to the bedrooms upstairs. Not so easy to carry laundry and bulky stuff up or down. We think down the road a bit, we might add some better access to the upstairs. 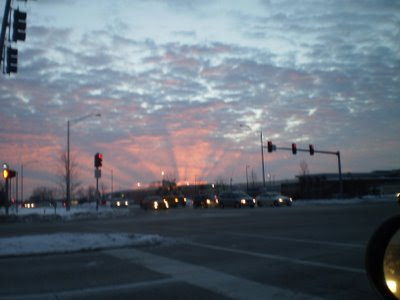 And this is a photo I shot on the way to work one morning. And you thought cell phone talkers were dangerous! Actually, I took this at a stop light.
Posted by Steve Carrow at 7:46 PM 3 comments:

So as long as I attribute an article, can I add it to my post? I should have read that user agreement closer....

Anyway, this is an article addresses the same concern we discussed when the boys were up in Chicago this winter. It is by Tom Friedman, well known of the NY Times.....

March 8, 2009
Op-Ed Columnist
The Inflection Is Near?
By THOMAS L. FRIEDMAN

Sometimes the satirical newspaper The Onion is so right on, I can’t resist quoting from it. Consider this faux article from June 2005 about America’s addiction to Chinese exports:

FENGHUA, China — Chen Hsien, an employee of Fenghua Ningbo Plastic Works Ltd., a plastics factory that manufactures lightweight household items for Western markets, expressed his disbelief Monday over the “sheer amount of [garbage] Americans will buy. Often, when we’re assigned a new order for, say, ‘salad shooters,’ I will say to myself, ‘There’s no way that anyone will ever buy these.’ ... One month later, we will receive an order for the same product, but three times the quantity. How can anyone have a need for such useless [garbage]? I hear that Americans can buy anything they want, and I believe it, judging from the things I’ve made for them,” Chen said. “And I also hear that, when they no longer want an item, they simply throw it away. So wasteful and contemptible.”

Let’s today step out of the normal boundaries of analysis of our economic crisis and ask a radical question: What if the crisis of 2008 represents something much more fundamental than a deep recession? What if it’s telling us that the whole growth model we created over the last 50 years is simply unsustainable economically and ecologically and that 2008 was when we hit the wall — when Mother Nature and the market both said: “No more.”

We can’t do this anymore.

“We created a way of raising standards of living that we can’t possibly pass on to our children,” said Joe Romm, a physicist and climate expert who writes the indispensable blog climateprogress.org.
We have been getting rich by depleting all our natural stocks — water, hydrocarbons, forests, rivers, fish and arable land — and not by generating renewable flows.

“You can get this burst of wealth that we have created from this rapacious behavior,” added Romm. “But it has to collapse, unless adults stand up and say, ‘This is a Ponzi scheme. We have not generated real wealth, and we are destroying a livable climate ...’
Real wealth is something you can pass on in a way that others can enjoy.”

Over a billion people today suffer from water scarcity; deforestation in the tropics destroys an area the size of Greece every year — more than 25 million acres; more than half of the world’s fisheries are over-fished or fished at their limit.

“Just as a few lonely economists warned us we were living beyond our financial means and overdrawing our financial assets, scientists are warning us that we’re living beyond our ecological means and overdrawing our natural assets,” argues Glenn Prickett, senior vice president at Conservation International. But, he cautioned, as environmentalists have pointed out: “Mother Nature doesn’t do bailouts.”

One of those who has been warning me of this for a long time is Paul Gilding, the Australian environmental business expert. He has a name for this moment — when both Mother Nature and Father Greed have hit the wall at once — “The Great Disruption.”

“We are taking a system operating past its capacity and driving it faster and harder,” he wrote me. “No matter how wonderful the system is, the laws of physics and biology still apply.” We must have growth, but we must grow in a different way. For starters, economies need to transition to the concept of net-zero, whereby buildings, cars, factories and homes are designed not only to generate as much energy as they use but to be infinitely recyclable in as many parts as possible. Let’s grow by creating flows rather than plundering more stocks.

Gilding says he’s actually an optimist. So am I. People are already using this economic slowdown to retool and reorient economies.
Germany, Britain, China and the U.S. have all used stimulus bills to make huge new investments in clean power. South Korea’s new national paradigm for development is called: “Low carbon, green growth.” Who knew? People are realizing we need more than incremental changes — and we’re seeing the first stirrings of growth in smarter, more efficient, more responsible ways.

In the meantime, says Gilding, take notes: “When we look back, 2008 will be a momentous year in human history. Our children and grandchildren will ask us, ‘What was it like? What were you doing when it started to fall apart? What did you think? What did you do?’ ”
Often in the middle of something momentous, we can’t see its significance. But for me there is no doubt: 2008 will be the marker — the year when ‘The Great Disruption’ began. =
Posted by Steve Carrow at 8:41 PM 1 comment: