Read an interesting article in Wired about emergent behavior. In essence, large groups of individuals, by following simple rules of behavior, can express group behavior which cannot be predicted by examination of individual behavior. It's kind of like the concept of tipping points in group dynamics, but can occur in very simple organisms.

The article did not discuss how the initial simple rules come to be, but I am thinking this is where evolutionary pressures and adaptation are played out on a group level. If this emergent group behavior was not in some way adaptive and successful, it would not continue.

So I got to thinking about humans, and whether you could really say we have emergent behaviors. We are a lot more complex than an ant, fish, or bird, but there do seem to be repeated patterns in history, especially when you get a lot of us crammed together. It's just that a lot of these behaviors ( and I am still not certain if they can be called emergent) seem really detrimental. War, genocide, mob rule, riots, why do these seem to be common reactions to environmental stresses? Is religion an emergent behavior? How many people amass in a tribe or group before thoughts of immanence and the transcendent occur?

Not sure this will ever get answered, as we have so many ways of transmitting information besides direct face to face presence, and there are a relative few individuals that have larger, more outsized influence than the majority.

I may have to read some E.O. Wilson, other social theorists and see if this has been thought about.

And, some emergent behavior of another kind: 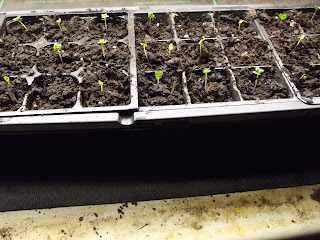 These little guys (cabbage)  popped up several days ago, and most of the other seeds are now up.

Posted by Steve Carrow at 7:41 PM No comments: