The life of a tarp

A tarp is a handy thing when you want to keep something dry, but don't have an industrial sized warehouse in the back yard. Now that we are hobby farming/homesteading, we have acquired some "stuff".  Some of it won't or shouldn't fit in the pole shed, and some of it is just temporary. We also heat with wood, and it should be kept dry to make the most of it. If I've split more wood than will fit in my storage sheds, I tarp it. (time build another wood shed!)

There are actually several life stages of a tarp. Tarp in its initial setting sits on a shelf in a home improvement or hardware store. They used to be only blue, but now come in several colors.  Once purchased by the typical home improver, they might be used for about anything. They come in light duty, medium duty, heavy duty, trucker industrial duty, good old canvas, and even one called recreational. I have never had a recreational tarp, but suspect they are pretty flimsy, more for casual frippery and nothing serious.

While it depends on the application, I generally buy a medium duty, trying to go for the eternal compromise between short term and long term economics.

When a tarp is put to its first use, it is pretty much waterproof, and I use them for covering things that need the best protection, or that probably really should be stored inside. But after a few months, or a season, the wind and sun takes its toll. They begin to wear, and you can see wrinkles, light streaks of discoloration, and maybe even the beginnings of light showing through in pinholes. They are still pretty good, but might be leaking a bit, so moved down the hierarchy to slightly less demanding duty.


This new tarp is protecting a new electrical wood splitter we just bought. The splitter will get its own post later. 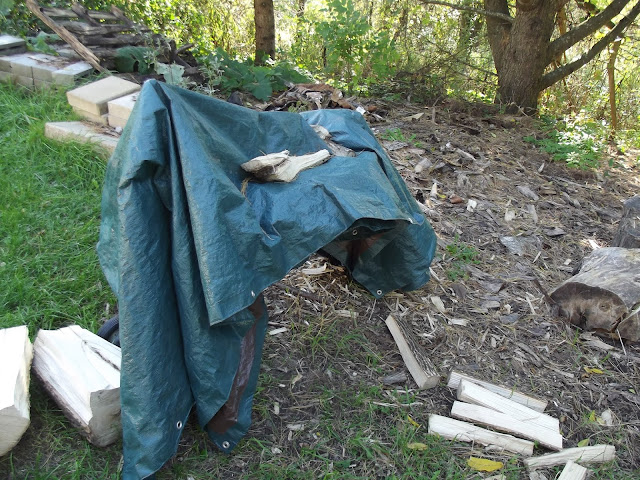 This tarp is protecting our grill/smoker. It's a bit older. but still in good shape. 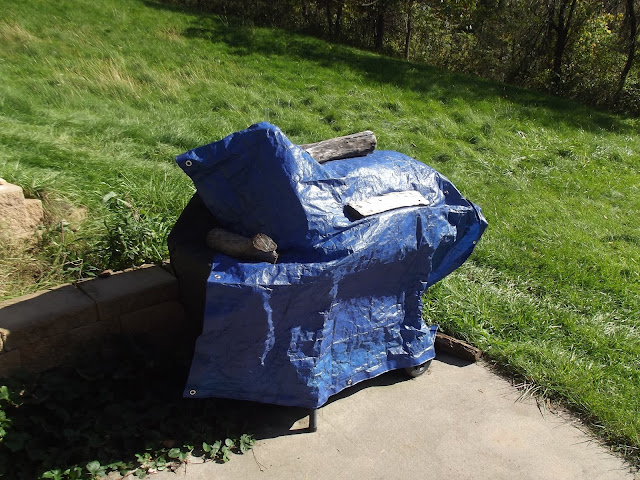 Another season or two, and now they definitely leak, but only in areas, and most of the surface does deflect rain. Can still be used for things that can stand a bit of water. Maybe used for temporary coverage, maybe to cover a tiller or brush mower that ran out of gas before getting to the shed. Or covering a load in the pickup truck on a trip that threatens rain.

After another year or two, it is definitely tattered, and you wouldn't want to count on it for shelter in a rain. By this time, it is good for gathering leaves to drag to the mulch pile, or to catch wood chips shooting out of a chipper, but not much else. It can be in this stage for a couple years, if stored when not being used.

Once large tears have developed, it's pretty much useless, and time for the trash. They are effectively unrecycleable here.

Recycling has always been a bit of a conscience salve anyway, rather than a true implementation of a circular economy, but it has become even less effective since China stopped taking our poorly sorted detritus last year. I suspect much of it is going in to landfills now, but reducing plastic use can be hard to do completely.

I'm ready to try the used old billboard tarps next time I need new tarp. While they don't recycle either, at least I'm repurposing some plastic. Until I can figure out a better, more sustainable way, I will use tarps for temporary wether protection, and just use them for as long as I can.


Posted by Steve Carrow at 7:43 AM No comments:

It is winter here now, with about five inches ( 127 mm) of snow on the ground, with wind chills around zero F ( -18C). Pretty typical for a Wisconsin winter.

Plenty of activity around our bird feeders, especially the juncos hopping around on the ground. Since retirement, I spend a bit more time just watching and trying to grok the natural world around me. 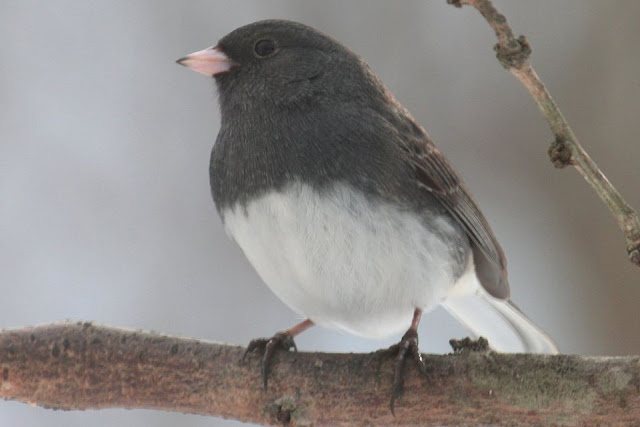 The thought that keeps coming to mind as I watch from my warm home is how amazing it is that these little balls of fluff can survive and thrive in the cold, with so little food easily accessible. They enjoy the bird feeder, but do just fine without it. Their existence proves that their ancestors for millions of years managed without birdseed from the hardware store.

The same applies of course, to the other creatures that stay active all winter, but to me these little guys epitomize the ability to find a way to survive in marginal conditions. Heat loss is a function of the ratio between volume and surface area, so small birds are playing a tough hand in that respect.

The world, and the universe itself, for that matter, is a big old entropy generating engine, and we are all busy doing our part, consciously or not. I imagine there is some soil bacteria species that will find sustenance even in the tiniest spec of junco poop.

I'm no paleontologist, but my mental image of evolution goes like this:

The planet has many different energy flows happening continuously, with sunlight being the main one driving living systems, once plants figured out how to photosynthesize. Boy, wasn't that a great leap forward.

Then, as plants multiplied and got to crowding each other, evolutionary forces kicked into overdrive, with some plants growing taller to grab the sunlight first, or others changed other features to get enough energy to reproduce.

Before you know it, the tropics were packed, and some plants figured out how to withstand freezing by going dormant each winter or changing their internal chemistry. Thus plants crept toward the poles, covering more and more of the land. ( hmm, wonder what might have happened without our 23 deg. tilt?)

Insect and animal life came along over time, and they all figured out a way to harvest energy and reproduce as well. All along the way, more and more subdivided niches were filled, as one species or another found an energy flow to exploit.

And then Homo Sapiens came along. Our unique assemble of traits mean we are a generalist that can exploit many energy flows. Even fossilized carbon from millions of years ago. Oh, we'll finish extracting all that energy soon, and the food web will adjust accordingly.

The thing to keep in mind, with all these energy flows, is that each species finds a balance between population levels and the energy flow they are a part of. At the geological scale, our use of fossil carbon is a one time brief blip, and our numbers will readjust to the available energy, as the food web hopefully restabilizes in a complex, diverse new balance.

I'm thinking juncos will still be part of it.


Posted by Steve Carrow at 8:57 AM No comments: