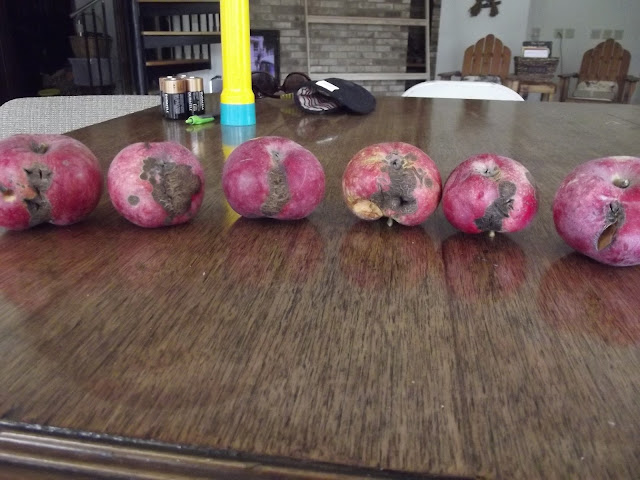 Last year, we got quite quite a few apples, and still have some canned apple sauce from them. This year not so much. I think everyone knows that the spring was weird, with an abnormal early warmth, followed with a late hard frost. This hurt fruit trees to varying degrees in the midwest, and then we had a very dry summer. These seem like the most obvious variables that would cause yield to bounce up and down from year to year, but I imagine there are others I don't recognize yet.

We had very few apples on several of the trees this year, but one had a middling yield, but had a lot of the disease shown above. I still know practically nothing about trees yet, so don't know what it is. Adding to the oddness, one tree, off by itself around 50 yards from the others, is absolutely loaded, and no sign of any disease or insect damage. We will probably harvest this next weekend. The apples are rather small, probably more because they should have been thinned some.

I hope to be better prepared to do a decent thinning job next spring. (After some hard pruning this winter, these trees had no attention for years).

It seemed like out tomatoes took forever to start ripening, but we ended up with an ok yield. We had to pick the last of them while green, since we wouldn't be back up before the likely first frost. Here is what they look like as they slowly ripen. Every couple days, we process a small batch, and as of today, they are almost all done. 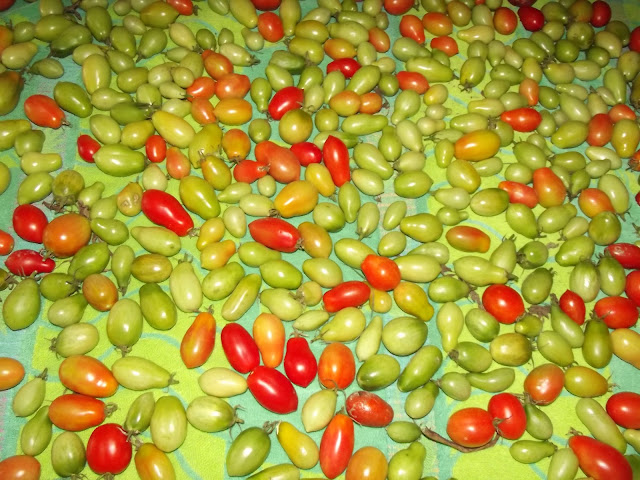