It actually died when we were away traveling In July at son Joe and new daughter in law Kendra's wedding. We got back just in time to cook the meat, and toss the ice cream and fridge leftovers. Anyway, I had wanted to get a very efficient replacement, but not on such short notice. I ordered one immediately. Sunfrost are not stocked in stores, but are made to order, with delivery in 8 weeks.


So, right at the height of vegetable season for the CSA we belong to, http://www.greenearthinstitute.org/ we used a cooler for our refrigerator. Yeah, I'm a little nuts. It was tricky, but we got through it. ( I owe Patsy for that one) Sunfrost ships by common carrier, so I had it delivered to work, so I wouldn't have to stay home to receive it. I then rented a Menards truck and hauled it home. These sunfrosts are HEAVY. They are almost as heavy as the ancient fridges that had cast iron bases and heavy gage walls. Made me wish I'd been doing more to keep in shape.

So, we've had it for around three months now, and love it. I guess it goes without saying that they use much less power than other appliances. There are other benefits. Part of its efficiency is derived from no defrost cycle. This means that the humidity stays high in the fridge section, and veggies last a very long time compared to the old one. Also, the freezer and refrigerator have separate compressors and thermostats, so you can dial each one in just right, and neither one works more than it has to. So ice cream is always just right, not melty, and not rock hard. ice cubes freeze clear, don't disappear over time, pop out easily, and don't get that funky freezer taste.

While I would strongly recommend making sure your next fridge is at least energy star rated, these Sunfrosts are pretty expensive, and probably will mostly be bought by people who are really serious about energy saving. They even have 12V models for people living off grid on solar panels. 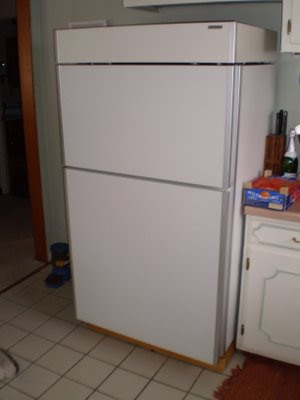 And here is a shot of the compressors and "coils" on top of the unit. 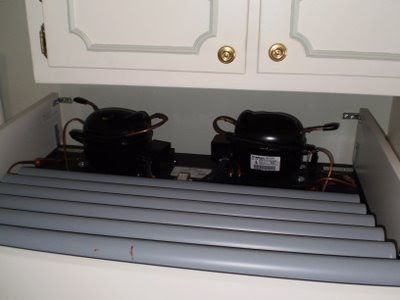