I was reading a bit about optimal foraging theory in Wikipedia, https://en.wikipedia.org/wiki/Optimal_foraging_theory

Basically, the theory describes how organisms utilize strategies to optimize their energy return on the effort to find food. The same concept as EROEI, which those who follow peak oil and civilizational prospects think about a lot.

It's really just common sense that those individuals that have behavior patterns that get the best bang for the buck will reproduce better, and thus there will be a genetic drive toward pattens that optimize energy used in gathering more energy.

But it gets more complicated when you consider the competition between other species in the same or similar ecological niches, and the fact that there is more than one way to get good energy return. One might opt for a high energy effort, high energy return approach, or a low energy expenditure, low return approach. Some strategies are good for short term advantage, some are conservative, but win over the long haul. And there are many other strategies that might end up playing out as a group or a set area, as long as the net return is optimized.

So it occurred to me that really, that's all us humans are doing, following a well trod path as any successful species would. The studies that have been done all look at bugs, or birds, or fish, but wouldn't it be interesting for the theorists to look in the mirror. Physics and biochemistry underlay it all. In our daily lives, in our societal organization and in our exploitation of resources, we are really doing no more than a gazelle or a mole would do.

But- We have the special ability to pass on behaviors to others through our complex communication , both to contemporaries and future humans, so improved species wide energy return improves in hours, days or years, instead of countless generations. To top things off, once we began leveraging our tool making ability to harness fossil sun energy, well, we blew the doors off any predictions on how our niche in the ecosystem might have played out.

So what does this portend for our future? How will this inherent property of humans and all organisms affect how the end of fossil fuels plays out in the coming century? Is our species locked in to hard wired behavior patterns, where the "survival of the fittest" approach wins out, or will a different pattern, like symbiosis, or cooperative collaboration win out? Will we play the long game, and start repairing the frayed web of life, maximizing the local carrying capacity for us and all species, or will we play the short game, and join the yeast in the petri dish as another example of fast and short population growth and decline?

The world is a big place, and nature has many parallel experiments going on at all times, so we might see both, and many variations of each. I plant trees.

For a lighter end to this entry, here are some photos of a recent effort to harvest energy, utilizing tools and learned behavior. We and our neighbors took advantage of a good apple year, as both domestic trees and feral trees with passable taste are bearing heavy this year. Since we do very little in annual management of the trees, our return should be pretty high. 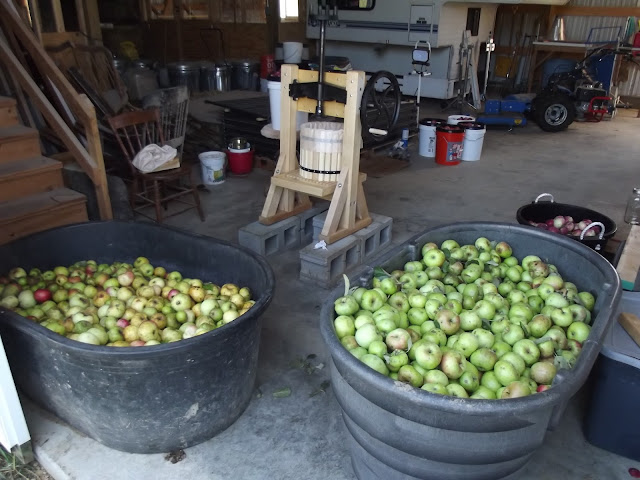 The new apple grinder and press, ready for action. 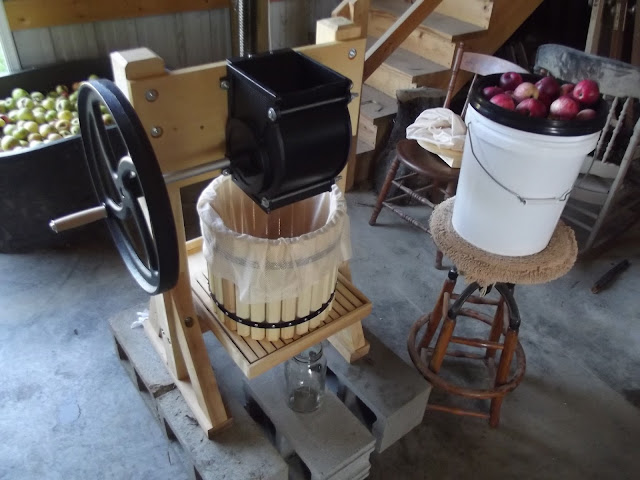 From our best tree- No chemicals, no worms, no apple scab or fire blight- it was a good year, and unreal production. We had about 15 buckets full from this one tree. ( And countless falls that the chickens took care of) The later ripening varieties will get their turn in a month or so. 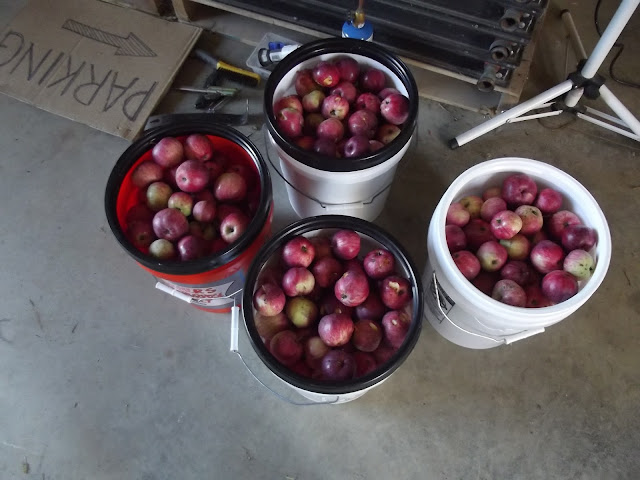 I'll do another post soon, showing the press in action, as well as bottling the cider I have fermenting now.
Posted by Steve Carrow at 8:23 PM 1 comment: